I don't know where I'm going but I can't wait to get there. 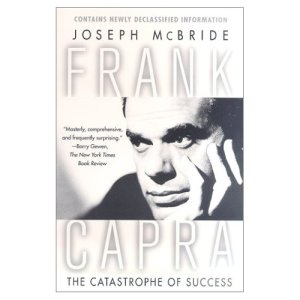 It's not such a wonderful life for Frank Capra

This book was a battle to finish.  I give two explanations for this: 1) director biographies tend to be lengthy as their authors seem to love dissecting every move the subject makes (see: Alfred Hitchcock: The Dark Side of Genius) and 2) Frank Capra had a sad, scared existence.  That’s a pretty brutal statement for me to make from my comfy couch, isn’t it?  Allow me to explain.

Frank Capra is best known for being the director of such films as It Happened One Night, It’s a Wonderful Life or The Mister’s favorite, Arsenic and Old Lace.  Terms such as Capraesque and Capricorn were coined to to describe how Capra loved to tie on a happy, America the Beautiful ending on most films.  The little guy triumphs in Mr. Smith Goes to Washington and the madding crowd shuts up and listens in Mr. Deeds.  As an Italian immigrant, Capra puts a shine on his adopted country that it kinda didn’t deserve.  And as thanks?  Yeah, he gets McCarthyism.

The look at red hunting I got in this book has never scared me more.  As a director, decisions are your trade.  Once the fear of blacklisting of any kind set in, Capra’s movies suffered as his tail became firmly planted between his legs.  Yes, it was valid to be worried.  Those suspected of being red or even slightly pink became scapegoats for every evil under the sun.  If you questioned anything the United States did or thought about doing then you might as well book your travel to mother Russia.

At the beginning of this book Joseph McBride does a brilliant job of saying “Okay, guys.  This is gonna suck!”  He starts in foreshadowing right away things will get truly terrible and never recover.  So when the proverbial shit starts hitting the fan around mid-book it is hard to suck it up and keep trucking.  McBride details every rethink and every reconsidered step Capra makes out of concern that he will be anything but a flag-waving American.  I literally winced as time after time Capra stepped away from the plate and chose not to make any real movies, just lollipops.  Part of this self-consciousness is also, as the title says, tension over being a hit-maker.  That’s just as frustrating to read about as Capra’s blacklist-inspired wishy washiness but somehow not as depressing.  This guy loved America and it made his life a horror.

Would I recommend this book?  This one is not for everybody.  I largely feel more relief than enjoyment as I look back at my read.  It’s definitely well-written but our hero doesn’t fare well under such close examination.  I guess it depends on how much you can tolerate when it comes to corrupt government and those who are happy for it continue on it’s merry way ruining lives of those who support it most.

Frank Capra: The Catastrophe of Success

One Response to “Frank Capra: The Catastrophe of Success”